Will the Democrats follow British Labour down the revolutionary rat hole? 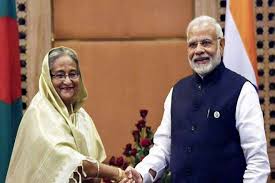 “A leader leads by example, not by force.” – The Art of War by Sun Tzu, 5th century BC

Bangladeshi Prime Minister Sheikh Hasina has long been accused of sacrificing her country’s interests and well-being while selling out to India. This is not only the viewpoint of her political critics but a widespread, general consensus among Bangladeshis.

It is a well-known fact that anti-India sentiments run deep within a sizable portion of Bangladesh’s population. Recently, the murder of Abrar Fahad, an engineering student at the Bangladesh University of Engineering and Technology, by the ruling party’s student wing triggered countrywide protests by students, academics and the general public.

Unmistakably, Sheikh Hasina’s obvious allegiance to India at the expense of Bangladesh, be it with regards to trade or water sharing or any of myriad other factors, has fueled questions about her alliance with New Delhi.

It is extremely important to mention here that as an authoritarian leader, Sheikh Hasina, seated in power thanks to her alliance with India and not with the mandate of the people, has never cared about

The CAA launched last year amended a 1955 law by providing a path to citizenship for illegal migrants of Hindu, Sikh, Buddhist, Jain, Parsi and Christian minorities who fled persecution from Pakistan, Bangladesh and Afghanistan before December 2014.

India’s ruling Bharatiya Janata Party has made sweeping derogatory statements and suggestions that Hindus in Bangladesh have been systematically tortured, so much so that they have sought refuge as illegal migrants in India. Such accusations are important for the BJP in order to justify its tolerance of indiscriminate torture and killing of Muslims in India.

Sheikh Hasina and her Awami League party have caught on to the BJP’s tricks and stated that the Bangladeshi government will look into the matter, and although their undisputed allegiance has been to India, the CAA has hit many sensitive nerves.

Another point causing unease within the Awami League, a point vastly echoed among Bangladeshis, is the possible exodus of mainly Muslim migrants fleeing persecution in India, particularly from the state of Assam.

Bangladesh is still in a state of limbo having accepted nearly a million Rohingya refugees from Myanmar and cannot possibly envisage taking any more refugees from India or anywhere else. Although India’s claims are that the Muslims in Assam are Bangladeshis, having originally fled East Pakistan during the partition of India in 1947, yet another bone of contention has been created between the two countries.

Bangladesh rightfully demands that India provide proof of its claims, which, logistically, will be an extremely tedious task. This is not to say that illegal border crossings into Bangladesh are not taking place on a daily basis.

The CAA provided, for the first time, a picture of “trouble in paradise” between the two neighboring countries, to the point where three Bangladeshi government ministers postponed their official visits to India. Granted, just last October, Sheikh Hasina and Indian Prime Minister Narendra signed seven “treaties” (a meaningless term when utilized for the Bangladesh-India relationship as these documents tilt heavily in favor of India), the CAA provides a break from the delusion for Hasina, who has begun to see clearly that all is not well in this political romance, something the people of Bangladesh have known for quite some time.

Beijing has invested US$38 billion in Bangladesh and has supplied the its navy with submarines. In an effort to compete with China’s investment, India rapidly provided a $500 million line of credit in order for the Bangladesh Army to upgrade its defense systems and hardware, no doubt a way to further its control over Bangladesh’s military complex.

Sheikh Hasina seems to come out as the winner in this chess game, being able to continue rhetoric of how well the economy is doing under her rule, but the nation of Bangladesh is not. Anti-India, anti-Hasina and anti-Awami League sentiments are at an all-time high, and had it not been for the fear factor of a ruthless, dictatorial regime, better organization and leadership of all opposing groups, there would have been a revolution to oust the oppression and corruption a long time ago.

There has not been a peep out of Sheikh Hasina or members of her party against the inhumane treatment of Muslims in India under the BJP. The status quo of their extreme power and control takes precedence over morality, but that cannot be good news for the silent Bangladeshi public, about 91% of whom are Muslims.

Despite a temporary glitch in the Bangladesh-India romance, the roots of the Awami League’s and Sheikh Hasina’s very position as the ruling party and prime minister, albeit unelected, are profoundly embedded in and by India. India was, is and will always be the priority over Bangladesh for Sheikh Hasina.

However, the CAA seems to have left her dumfounded, searching for her words when she declared publicly that she could not understand “why India did this.” Moving forward, one can hope that the BJP will be regarded with distrust by the Bangladeshi leadership, if that is not too much to hope for.

Had there been leadership that genuinely worked toward the good of its people, the strategic geopolitical positioning of Bangladesh could have been much better utilized internationally to benefit Bangladesh and not its neighbor, completely against the will of the majority of its people, who have been dragged into a political game of relinquishing sovereignty, a game they never signed up for.

Unfortunately, the dream the freedom fighters of the Liberation War in 1971 had has not yet reached fruition. To this day, Bangladesh is oppressed by an authoritarian regime, which has stripped away individual freedoms of every kind, benefiting the top 1% Awami League cronies, and a leader who leads by force, not by example.