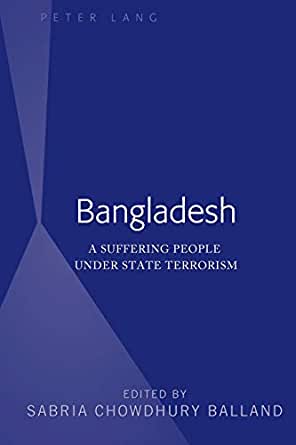 Bangladesh: A Suffering People Under State Terrorism explores the destructive political situation in Bangladesh under the one-party and one-person rule of the despotic Sheikh Hasina. The contributors to this edited collection examine the catastrophic political environment of the country in view of the Hasina regime’s relentless oppression and repression since 2009, the authoritarian rule of her father in the early 1970s as well as the topic of Indian political, cultural and economic hegemony to which this dictatorial regime is increasingly surrendering Bangladesh’s national interest, integrity and sovereignty. The contributors also attempt to expose the wholesale corruption and unprecedented vote-rigging that have rendered the regime completely illegal and illegitimate. They also highlight how the regime has been clinging to power by systemically unleashing terror and tyranny through its widespread networks of state machinery.

This book is an anthology of essays by intellectuals respected intellectuals such as former Chief Justice SK Sinha and noted journalist Mahmudur Rahman.