Leaving democracy behind by Ali Riaz 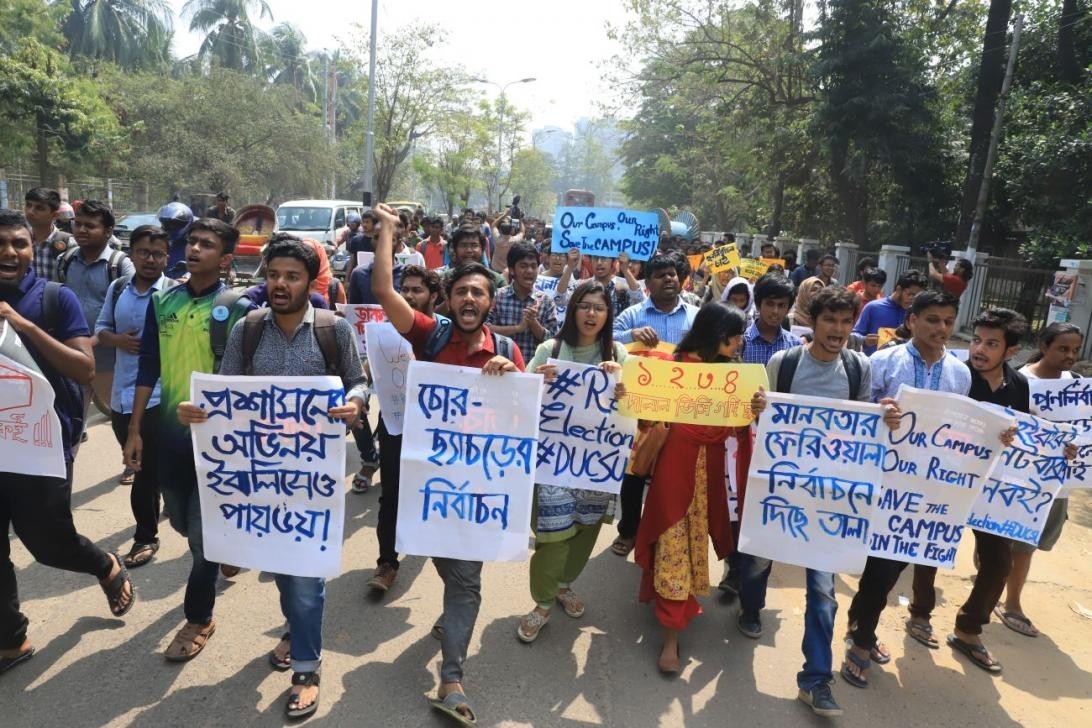 The most appropriate description of the year 2019, particularly of Bangladeshi politics, is perhaps a dialogue in Act 3, Scene 4, of the Twelfth Night of William Shakespeare: “If this were play’d upon a stage now, I could condemn it as an improbable fiction.” But we are aware, they were not improbable fictions. The events that marked the year were real, but they were full of paradoxes; the incongruity between what seemingly appeared and what was the essence was palpable; differences between official narrative and reality were stark. The most conspicuous of all these paradoxes was the claim that the country has continued democracy through a controversial election on December 30, 2018, while throughout the year, the opposition has been repeatedly denied permission to hold public rallies, BNP leaders were charged with frivolous cases, gagging media has become the norm, any effort to organise protests were dealt with force, and seldom dissent was tolerated.

It is not only the de facto one-party parliament created through the “2018 election” which indicates the state of democracy, but most importantly the absence of politics as well. The citizens’ right to speak freely, without fear, and freedom of expression, two fundamental elements of politics, have become almost non-existent. The Digital Security Act which came into existence just before the election of 2018 has achieved success as the entire cyberspace has become either an echo-chamber or puerile. Dissent has now been criminalised. The hollowing out of democracy is not by accident, but rather by design. This is the defining feature of an electoral authoritarianism, a particular form of hybrid regime. The electoral exercise is the only façade of democracy left standing; but bruised, battered and perhaps irreparably damaged. Elections are held to offer a veneer of legitimacy and nothing more. As such, in 2019, the paradox lies in the fact that the ruling party and the government claims to have democracy, while politics remain absent.

The 2018 election, in which the law enforcement agencies, civil service, election commission, and the party delivered the victory to the incumbent, has shattered the citizen’s faith of the electoral system. More elections have been held in 2019—the Dhaka (North) City Corporation (DNCC) mayoral election, Upazilla elections in five stages—but very few voters showed up. Most voters had spoken, by remaining silent; they voted by not showing up at the polling centres. Yet neither the Election Commission nor the government listened to the message; they were happy to see that the election day has passed and gleefully claimed that they had done their “duty”. Unfortunately, but not unsurprisingly, the design to damage the electoral system was not limited to the national level. The Ducsu election, held after 28 years, was tainted by the ruling party student activists. Anyone who cares enough to investigate elections of the professional organisations and trade unions would find that elections are rarely held—usually a set of candidates are chosen as “consensus” candidates, a system akin to one-party states. Even the ritual of an election is now being shunned.

The absence of a formidable opposition and political activities have established the ruling party’s complete control over state and politics, yet the ruling party seems to be jittery at every turn of events. Each instance of popular agitation or expression of discontent is described by the ruling party leaders and their supporters as a “conspiracy” to destabilize the country. Periodic outbursts of social movements and movements within the universities against the university administration revealed the simmering discontent. But the government remained unmoved and viewed them as a challenge to its authority. Consequently, the government resorted to coercion and imparting fear. These have become primary modes of governance. The number of extrajudicial killings—456, and the number of victims of enforced disappearances, 83—between January and November demonstrate the tendency. The unwillingness to act against corruption and abuse of power by different vice chancellors is a reflection on the mindset of the ruling party. Often, like previous years, violence against lawful protest, gagging the media, silencing the critics are franchised to the ruling party activists.

Despite the apparent political stability, a sense of uncertainty and insecurity among citizens is easily palpable. These arise from the lack of confidence on the government’s narratives. This is what created the opportunity for “rumours”. Often the air became thick with rumours and citizens panicked, not because someone conspired, but because the citizens have little confidence on what was said by the officials and ruling party leaders.

There is no doubt that the opposition, particularly the BNP, is in its weakest form. BNP has been constantly mocked by ruling party leaders for its inability to mount a movement to free its leader Khaleda Zia. But that did not preclude the ruling party to find the BNP’s hand in anything that went wrong. For example, the mistakes in the flawed list of collaborators published by the Ministry of Liberation War at the end of the year were blamed on the BNP. The BNP, after the farcical vote of 2018, promised to launch a movement, but remained absent on the street throughout the year, as if its promise to mount a movement is all that it is necessary to stop the agenda of the government. The BNP failed to reorganise itself, resolve the schisms within the party, and bring clarity about its leadership—who is in charge—whether it is exiled acting Chair Tariq Rahman or the leaders in Dhaka.

The discrepancy between what was promised and what was delivered was not an exclusive preserve of the BNP, however. Ahead of the tri-annual party conference of the AL, there were talks of “new blood”, “purification of party”, but after the festivities of the conference—leadership remained the same. The party didn’t even try to pretend that the grassroots leaders and activists had any role in selecting the leadership. It was nothing surprising because ahead of the party conference, leadership of various associate organisations such as the Jubo League and Krishak League, were selected in similar fashion.

Those who prefer to be optimistic had their moments when the government launched the anti-casino drive in mid-September. The drive, at the heel of expelling the president and general secretary of the Chhatra League, was portrayed as a “historic” and “unprecedented” anti-corruption drive. Prime Minister Sheikh Hasina and her cabinet members made promises that “no one will be spared”, but the bigwigs remained untouched. Notwithstanding the arrests of the few mid-ranking leaders of the Jubo League and Krishak League, the drive fizzled out in a few months. While it started with a big bang, the anti-corruption drive seems to have ended as a whimper.

The rhetoric of the government and the growing sentiment about Bangladesh’s relationship with India lay bare another paradox of 2019. While the ruling Awami League insists on “a golden era of relationship”, Sheikh Hasina received a lukewarm reception during her visits to India in October and November and the Indian government paid little attention to the concerns of Bangladesh regarding the fallout of the National Registry of Citizenship (NRC) and the Citizenship Amendment Act (CAA). A perception among Bangladeshis is all pervasive that Bangladesh’s gestures have not been reciprocated fully. Such perception has engendered an undercurrent of anti-Indian sentiment. But the ruling party activists have taken it upon themselves to violently suppress any criticisms of Indian policies. The brutal killings of the Buet student, Abrar Fahad, in October, after he posted a critical comment about the Indo-Bangladesh treaty on Facebook, and the attack on Ducsu VP Nurul Huq Nur in December after his organisation tried to organize a rally against the NRC/CAA, testify to this approach.

The questions, then are—what is the way out? What can be done to reverse the course of the paradoxes and stop spiralling downward into the rabbit hole in the coming year? The past may be immutable and the politics uncertain, but the future is not predetermined. It is erroneous to think that the future cannot be made; instead history is made by people. Perhaps it is well to remember Cassius’ dialogue in the drama “Julius Caesar” by Shakespeare: “The fault, dear Brutus, is not in our stars, but in ourselves, that we are underlings” (Julius Caesar, Act 1, Scene 2).