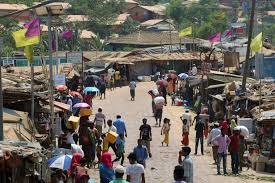 “The world will not be destroyed by those who do evil, but those who watch them without doing anything,’

The government of Bangladesh seems to have no other choice but to reimpose a lockdown in order to quell the spread of the Covid-19 pandemic. The need for a second lockdown arises greatly due to the total mismanagement of implementation of the first one. The premature reopening of the economy has only resulted in adverse consequences.

Long periods of lockdowns have impacted the agricultural sector, the business and trade sectors, manufacturing and utility sectors, information and communication sectors, hotels, transport and tourism sectors severely. In addition, one million garments workers have lost their jobs due to the global crisis.

Normally, international remittances represent around 7% of Bangladesh’s GDP, according to the The World Economic Forum. However, the Covid-19 pandemic has had an acute effect on Bangladeshi migrants abroad as the majority of them live and work in countries which have imposed very strict lockdown measures. The largest percentage of Bangladeshi migrants abroad being in the Middle East is a contributing factor to the decline in remittances to the country as there has been a decline in oil prices.

According to the World Bank, total remittances by migrant Bangladeshi workers will decrease by $14 billion in 2020. This is a 25% decrease from 2019. The decrease in monthly remittance amounts, which average from $300 to $600 monthly, will have severe adverse effects on millions of households in Bangladesh.

All this and more beg a critical question: Is the Sheikh Hasina-led Awami League government making sufficient efforts to ensure accountable and transparent administration to minimize the massive spread of the pandemic?

So far, Bangladesh has had almost 100,000 Covid-19 cases and over 1,300 deaths. A group of local NGOs conducted a recent study and found that every three out of five people in the country are at high risk of facing serious health and economic vulnerabilities, with job losses affecting those who are already poverty stricken.

According to the study, among the 100.22 million people at high risk in terms of health and economics, 53.64 million are facing extreme poverty, earning less than 160 BDT ($1.9) per day. The study also found that more than half of these people already live in extremely poverty stricken conditions and say they have already run out of money.

According to the South Asian Network on Economic Modeling (SANEM), the rate of poverty in Bangladesh may double to 40.9% since the beginning of the pandemic. Since March, the average family income has decreased by 74%.

The country’s farmers have also faced a loss of over $6 billion just between March and May of this year.

The manufacturing sector of Bangladesh has suffered tremendously, particularly the ready made garments sector, which accounts for 80% of the country’s total export earnings. More than 4 million garments workers depend on the textile industry for their livelihood and are thus severely affected. Due to the reduction of orders placed by the United States and Europe, more than 1,000 factories have closed and more than 2 million workers have become unemployed. Conversely, the price of food, rents and other basic necessities have been on the rise.

According to the report, the Sheikh Hasina-led government has failed in sectors such as:

Unfortunately, the list does not end there. Even amidst the extremity of corruption and mismanagement, the Awami League government has not abandoned even temporarily its characteristic surveillance and abusive actions against journalists. The Ministry of Information has formed a cell in order to monitor 30 private television channels across the country in order to monitor “propaganda”. For those who know the Awami League, this is just code for monitoring any voices of dissent, of which there are many. 37 journalists had 67 cases filed against them for reporting on the corruption, theft and embezzlement of funds by the Awami League during the relief efforts.

All things considered, the question of whether the Sheikh Hasina-led government will be able to manage, coordinate and ensure the country’s well being and security in terms of health, morale and economics is a rhetorical one. If the performance of the Awami League were to be graded, it would receive a dismal failing grade.

Not to rub salt on the wound, but what more can be expected of a government which has continuously, since 2009, coerced its way to power without the people’s mandate? There will obviously be no accountability or transparency, nor fear of losing votes. After all, the Awami League does not bother with votes, except to manipulate them.

Regretfully, this status quo is one which Bangladesh is stuck with for the very simple reason that there is no possibility visible even in the distant future in which there will be a regime change because there has been an absence of proactive willingness from the people of Bangladesh for change. Change does not appear magically from rhetoric and criticism of the Awami League. It would entail identifying the myriad of problems which have resulted from the essentially one party authoritarianism and making efforts to establish and put into practice the solutions.

That awakening has not occurred in Bangladesh since 2009. The question is: will it and if and when it does, will it be too late?