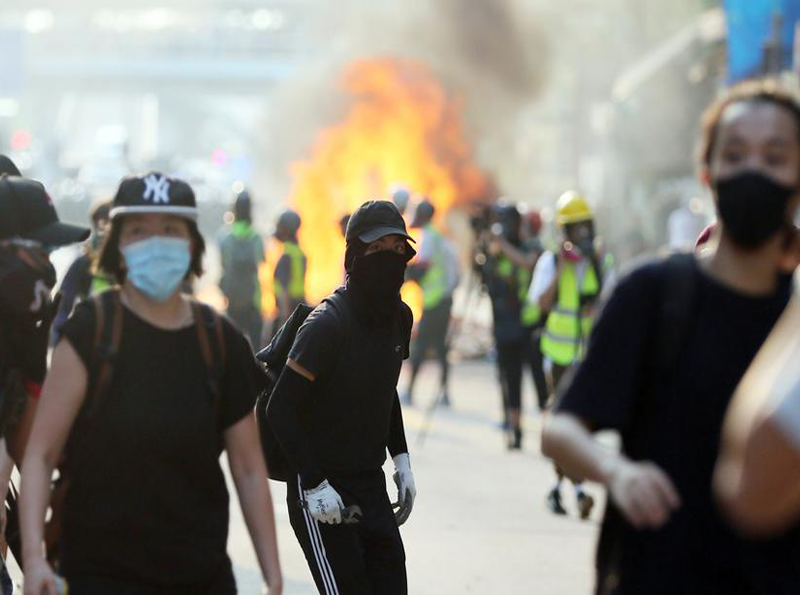 In a recent article, “Is democracy a dying species?” American commentator Pat Buchanan took note of rioting in Hong Kong, Barcelona, Santiago and Paris, and questioned what it portends for democracy:

“Yet one wonders: Why are these outbursts of violent protests and rioting taking place in stable, free, and prosperous societies? … If the beneficiaries of freedoms and democratic rights come to regard them as insufficient to produce the political, economic, and social results they demand, what does that portend for democracy’s future? … Is it possible that the Age of Democracy is itself a passing phase in the history of the West and the world?”

In posing his questions, Buchanan ignores a basic concern: the need for community and unity of purpose. Aristotle argues that there must be affection between the citizens. Behind John Locke’s social contract is a commonly accepted natural law given by God. For a democratic state, Jean-Jacques Rousseau envisages a general will to which all individual wills must conform.

Aristotle explains the need for friendship among citizens in his Politics:

“It is clear then that a state is not a mere society, having a common place, established for the prevention of crime and for the sake of exchange. These are conditions without which a state cannot exist; but all of them together do not constitute a state, which is a community of well-being in families and aggregations of families, for the sake of a perfect and self sufficing life. Such a community can only be established among those who live in the same place and intermarry. Hence arise in cities family connexions, brotherhoods, common sacrifices, amusements which draw men together. They are created by friendship, for friendship is the motive of society.”

Democracy is tyranny if one group lords over another group in ways that the latter group considers essential to its well-being. This tyranny is attenuated in the formulations of Aristotle, Locke and Rousseau because there is basic agreement at a fundamental level.

In Democracy in America, Alexis de Tocqueville explicitly recognizes democracy’s potential for tyranny. He notes three conditions of American society of his day that were basic to avoiding tyranny: a spirit of religion, the existence of civic organizations as intermediaries between the government and the people, and local government. The third is necessary for a civic commonality in which divisions tend to be minor. In Aristotle’s words, there are “family connexions, brotherhoods, common sacrifices, amusements which draw men together.”

This is not the case when Hong Kong is ruled from Beijing, Barcelona is ruled from Madrid, or Cheyenne is ruled from Washington. These governing relations are tyrannical to the extent that the rulers impose laws and regulations that might be fine in their jurisdiction but are abhorrent to the ruled in different jurisdictions. It is facetious to argue that the ruled had their say during an election when their fundamental beliefs are trampled upon by those of the rulers simply because the rulers outnumber the ruled. It would be self-defeating for a locality to respect a democracy (or any other form of government) that imposes such tyranny.

Locke was aware of this when he argued that when people’s well-being is threatened by the state, it is within the natural law for them to resist. Thomas Jefferson understood this and it is enshrined in the Tenth Amendment to the US constitution: “The powers not delegated to the United States by the Constitution, nor prohibited by it to the States, are reserved to the States respectively, or to the people.” The powers of the state must be severely restricted in a large democracy, and the locality of which Tocqueville speaks must be rigorously protected.

Although repugnant to liberal thought, Rousseau’s logic is clear. There are two major implications. First (and what is repugnant), it requires totalitarianism, in the sense that those who do not believe in state dogma must leave, and if they fail to leave, must be killed. Second, oppression is avoided because fundamental beliefs are in agreement among the citizenry. They can proceed democratically to determine the laws knowing that, while there might be minor disagreement, there will be no tyranny – for those who would be oppressed are either gone or dead. Democracy can proceed smoothly among comrades. Victories are enjoyed and losses are not really painful.

On the surface it would seem easy to avoid Rousseau’s draconian measures. Just limit the power of the government to press too hard on those whose views are different. In the words of Locke, “no one ought to harm another in his life, health, liberty, or possessions: for men being all the workmanship of one omnipotent, and infinitely wise maker.” Or of Jefferson in the Declaration of Independence, “that all men are created equal, that they are endowed by their Creator with certain unalienable rights, that among these are life, liberty and the pursuit of happiness.”

However, such words mean nothing to people whose goal is to achieve power over others and impose their will. A socialist is not going to exercise restraint when the logic of his position is to force those who disagree with him to succumb. The kind of civic friendship described by Aristotle is not possible. He might claim to be a democratic socialist, but this simply means that he intends to combine democratic tyranny with socialist tyranny.

Rousseau’s general will and Aristotle’s friendship are meant for small states. Josef Stalin applied the Rousseauian formula in the Soviet Union. The result was the gulag and tens of millions of people killed. Those who conformed their wills to the will of the state enjoyed decent lives. Today, China is successfully applying its own version of the formula. The massive tyranny exhibited in both cases is inevitable because the regimes exercise their wills over large multicultural populations. The few heads that roll in Rousseau’s small-scale idealization become hundreds of thousands or millions in a large-scale manifestation. Nevertheless, the reasonableness of Rousseau’s formula is recognized – as it has been from the dawn of time.

More pressing than Buchanan’s question as to whether democracy can survive is how to prevent those who desire tyranny from taking power, especially when the desire for tyranny is strong among the populace.