More women are being elected in autocratic regimes… 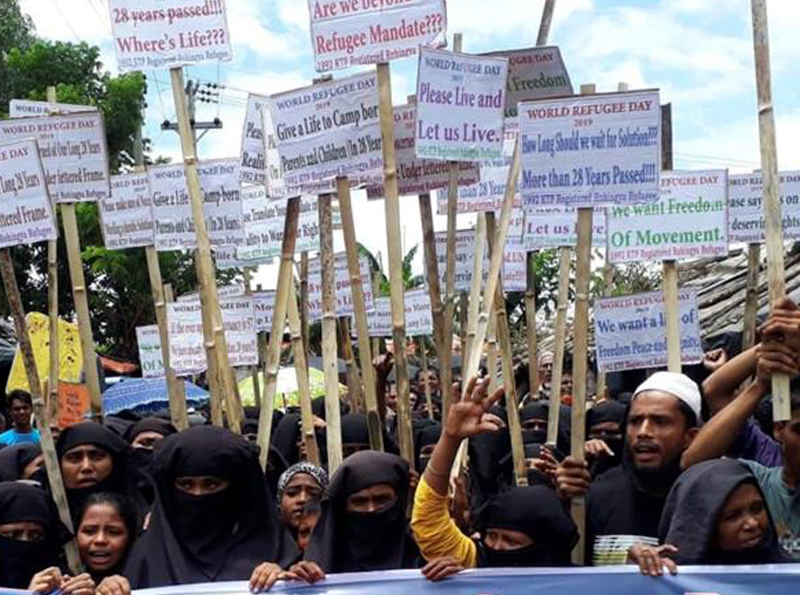 ASEAN has a responsibility to help facilitate a repatriation process that prioritises the well-being of the Rohingya.

After fighters attacked security targets in Myanmar’s northern Rakhine state on August 25, 2017, the Myanmar military responded by killing and maiming thousands of Rohingya civilians, raping hundreds of women and girls, and burning entire villages to the ground. Almost two years after the military-led “clearance operation” that forced more than 745,000 Rohingya men, women and children to flee and seek refuge in Bangladesh, this humanitarian crisis seems more intractable than ever.

Systematic state discrimination against the Rohingya, making them stateless and without rights, and recurring state-sanctioned violence has spurred various influxes of refugees into Bangladesh in the 1970s and 1990s.

Together with more than 300,000 Rohingya who had already taken shelter during these previous waves of violence, Bangladesh now hosts over one million Rohingya refugees – most of whom reside in Cox’s Bazar, now the world’s largest refugee camp. It is a testament to Bangladesh’s historic generosity that it did not turn away any recent arrivals despite already hosting large numbers of refugees.

Yet, neither Bangladesh’s patience nor its coffers are infinite, and the strain of caring for the refugees is starting to show. Merely a few weeks ago, Prime Minister Sheikh Hasina said in parliament that the country’s resources are nearing their limits and there is growing tension as Bangladesh grapples with how best to deal with the situation.

To any who have visited the refugee camps in Cox’s Bazar as I recently did with national human rights commissioners from Malaysia, Indonesia and the Philippines, one thing is clear: Conditions in the camps remain abysmal and unsustainable for a long-term stay. The overcrowding and lack of planning in many of these camps could lead to the spread of communicable diseases and create fire hazards, while deforestation has made the area prone to landslides and floods during the monsoon rains.

The basic needs for shelter, healthcare, water and sanitation are barely met. The refugees live in sweltering makeshift bamboo structures lined with plastic sheets; they have limited access to formal work and education and are completely reliant on aid handouts to survive. There are virtually no opportunities to advance their lives in the camps. Therefore, it is becoming necessary to urgently work towards the repatriation of these refugees back to their homes in Myanmar.

Against the backdrop of this growing predicament, a recent report on the Preliminary Needs Assessment for Repatriation prepared by the Coordinating Centre for Humanitarian Assistance on Disaster Management of Association of Southeast Asian Nations (ASEAN) was leaked.

Activists and experts have not received particularly well the report and have criticised it for mainly outlining the repatriation procedures and infrastructural preparedness of the Myanmar authorities for receiving refugees in reception and transit centres while ignoring or glossing over legitimate concerns.

It is here that the division between the Myanmar government and the Rohingya refugees is the starkest. The refugees have repeatedly stated they wish to return home, but to do so, they need guarantees of citizenship, freedom of movement, access to basic services, freedom to undertake economic activity and access to markets and, most importantly, trust in the security and protection arrangements for returnees.

Yet, what is discussed in the report does not reflect these basic expectations. There is no mention of citizenship and any of its constituent rights. It further supports the involuntary relocation of returning refugees, suggesting they will not be allowed to return to their original homes and will have little say in where they finally end up. There is equally no mention of restitution, nor is any reference made to the fates of some 128,000 internally displaced Rohingya still living in camps in Rakhine state since violence erupted earlier in 2012.

The report also fails to address the reality of the lack of trust and confidence between the Rohingya population and the Myanmar authorities. No outreach efforts have been made to include refugees in Cox’s Bazar in this process, and in the absence of goodwill between the two sides, any hope for them to voluntarily return is dim. The botched repatriation attempt of November 2018 is yet another proof of that.

But in the face of Myanmar’s refusal to concede any ground in the matter, what can the world do? Attempts to censure Myanmar at the UN Security Council have proven futile due to the lack of support from China and Russia. There are various sanctions imposed, including asset freezes and travel bans by the US, EU and Canada against individuals in the military regime but by and large, these efforts have not put enough pressure on the authorities in Naypyidaw.

However, accountability efforts are ongoing at the international level. International Criminal Court prosecutor Fatou Bensouda has requested the court to open an investigation into possible crimes against humanity committed against the Rohingya, and the Organisation of Islamic Cooperation has also agreed to take Myanmar to the International Court of Justice for violations under the Genocide Convention.

The UN Independent International Fact-Finding Mission on Myanmar is continuing its investigations after concluding last August that Myanmar’s top military leaders should be prosecuted for genocide, crimes against humanity and war crimes for their role in the crackdown against the Rohingya. The UN Human Rights Council has further established the Independent Mechanism on Myanmar tasked with collecting evidence of the most serious crimes that may be used for eventual prosecution.

While Malaysia has come out strongly in support of the Rohingya, ASEAN has had minimal public discussion. Most recently, ASEAN leaders at the 34th ASEAN Summit in Bangkok reaffirmed their commitment to a more visible and enhanced role to support Myanmar in providing humanitarian assistance, facilitating the repatriation process and finding a comprehensive and durable solution to address the root causes of the conflict.

While such a consultative approach has allowed ASEAN to continue engaging with Myanmar, the disconnect between the report and what is required for repatriation is extremely worrying. For repatriation to work, ASEAN must do more to convince Myanmar to truly collaborate with Bangladesh and UN agencies.

Myanmar must also be encouraged to engage with the refugees in Cox’s Bazar, and not just in a perfunctory manner. It is only if they see demonstrably improving conditions in Rakhine state that refugees would consider returning home. It may well be that only a unified and resolute front demanding that Myanmar makes some vital concessions could tip the scales towards a viable repatriation plan.

ASEAN now stands at a crossroads with its credibility at stake. Can it truly afford to continue turning a blind eye to Myanmar’s atrocities, with more than a million refugees stranded in Bangladesh and many more around the world, including 150,000 refugees in Malaysia?

Ultimately, how ASEAN responds to the report and whether it demands to see more substantive action taken to ensure the safe repatriation of the Rohingya will indicate what role it expects to play in the months and years ahead.

Today, more Rohingya are living as refugees than in their homes in Rakhine state. After so many failings spanning decades, the world has an historic duty to do better this time.

The views expressed in this article are the author’s own and do not necessarily reflect Al Jazeera’s editorial stance.