‘Our only aim is to go home’: Rohingya refugees face stark choice 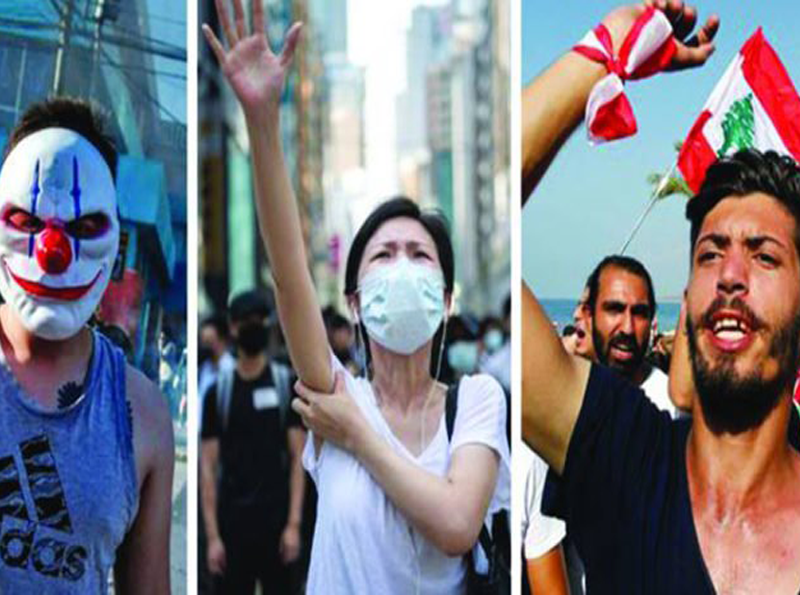 People across the world are protesting more than ever before. William Milam explains why

I think of that song these days every time I look at daily newspapers or watch the TV evening news. All the world seems to be in protest against something; and for sure, there is a lot to protest against. Whether it be Zimbabwe, South Africa, the UK, the US, Hong Kong, France, Russia, Argentina, Chile, India, Pakistan, Bangladesh, or many other troubled countries, people are in the streets protesting against the local status quo, whatever it is. Often (though not always) they are throwing bricks or paving stones at police in body armour and helmets with face guards and getting fired on by those police with tear gas, water cannons, rubber bullets, and sometimes real ones. The evening newscasts take on a uniform look, and one has to listen carefully to learn which protest one is looking at. As I watch, I usually start to hum the Kingston Trio’s song and remember the line that comes in its middle that seems to describe our world today as well as it described the one of the 1950s: “…the whole world is festering with unhappy souls…”

And these seeming universal protests have led me to do some thinking and some research into what seems a current phenomenon — a whole world of unhappy souls, willing to put their bodies on the line to protest against their status quo. I don’t remember a period when protest seemed so ubiquitous, or so varied as to its cause. In some cases, it is clearly ideological; in our partisan, tribal world, it almost natural for conservatives (defenders of the status quo) to resist change, whether that change is to reduce the inequality of incomes, liberalize society, reduce discrimination — to resist change in other words. There is protest over fundamental political issues — BREXIT, Catalonia, political rights (Hong Kong), corruption — and social/economic issues like immigration, wages, taxes, income inequalities, and over unique issues like gun control or abortion.

Am I exaggerating? I thought I might be, but according to Harvard University Professor of Political Science, Erica Chenowith, who studies these questions, protest over the world has grown significantly since 1945 to “an unprecedented level of frequency.” Moreover, my lack of success in finding a common issue to thread all these protests together is because there is none these days; the common thread is that it is driven by local, proximate causes, as has always been the case. But there do seem to be some general causes that are less issue-related than generic to our times. I will take these up below, but first another general finding by Professor Chenowith: the success rate of  protests which demanded systemic political change has fallen drastically, from about 70 percent two decades ago to about 30 percent now. There seem to be reasons for this too, and I will get to these also below.

I became interested in protests a couple of years ago when the PTM first appeared on the Pakistan political scene. I wrote one article about it and then could not write anymore. Other Pakistani political protests did not interest me as much as they often seemed, from my distant vantage point, to be choreographed and calculated not at protesting the status quo but at making some other political point. And of course, the protests against things like letting Asia Bibi out of jail are too scabrous to deserve the name of protest. My interest has been revived by the student protests that have taken place in Bangladesh over the past year, and which I wrote about two weeks ago. Two earlier ones were limited to university students in Dhaka, protesting over the government setting quotas for jobs for graduates, and over traffic control in a city in which traffic is perhaps the worst and most dangerous in the world. The third began about two weeks ago when the Awami League government sponsored student organization murdered a student over his criticism of the government and the prime minister on social media. This precipitated student protests against the government in all the cities of Bangladesh by students at universities in those cities. I suspected the nationwide protests would not be sustained, and I seem to have been correct as the university in Dhaka where the student was murdered has been closed, and the students outside Dhaka have returned to their books. The questions remain, however: why are such protests so much more common now than even 20 years ago; and why do they fail so much more often?

There are three factors of modern political life that experts believe to be at work in the increasing resort to protest to try to effect political change. One is the weakening of the democratic spirit across the globe. I wrote about this in March of this year when reporting on a new study from Sweden’s University of Gothenburg showing that the movement of countries toward democracy has slowed markedly and that toward authoritarianism picked up dramatically. No matter how it is put, this means that pressures from the public for change do not filter up to and through elected representatives who are very sensitive to public opinion. With this outlet reduced to close to zero, common unhappiness over an unpopular policy or issue builds up without an outlet, and pressure for the change builds up as if in a steam kettle and, bang, mass protests are born. Another factor is the revolutionary change in communication habits and capacity. The rise of social media makes it far easier to spread the arguments for action, and for activists to organize protests, and to draw huge numbers of participants in the space of a few hours, which would have taken years of patient organizational work to draw into a mass protest before the advent of social media. Finally, the tribalization of our societies—the “us vs them” mind set that has captured a great many people – increased the tendency of people of one social group to take to the streets to protest something that affects or offends their tribe. This is not to suggest that their protest is not completely legitimate, but structural political change is usually effected when protests are inclusive and made up of several if not all social classes.

Why do they fail so much more often? We see the answer right before us in South Asia. Authoritarianism, in South Asia as well as elsewhere, is now so well established that it has developed defence mechanisms. One is muzzling the media, so protests are not mentioned, or more likely undermined through propaganda through a captive media designed to paint them as anti-state, subversive, supporters of some “wicked” ideology and/or some foreign enemy. That may sound familiar to some South Asians. But as we have seen also in South Asia, using the force of the government is also in their toolbox. In Bangladesh, protests have been cut short by the violence of unofficial arms of the government’s security apparatus. More effective in the long run is the Orwellian system of preemptively getting rid of opponents through pervasive surveillance, and the use of unofficial and well as official security organs to make sure that those opponents considered really dangerous disappear through arrest or through outright killing. It is a nasty business to be an authoritarian.

I think good way to end this is the Kingston Trio’s prescient final lines of their song: “They’re rioting in Africa, There’s strife in Iran, What nature doesn’t do to us, Will be done by our fellow man.”

The writer is a diplomat, and Senior Policy Scholar at the Woodrow Wilson International Center for Scholars in Washington, D.C.