Bangladesh’s two decades: Out of the basket into the Future

No rule of law in Bangladesh, says ex-CJ Sinha 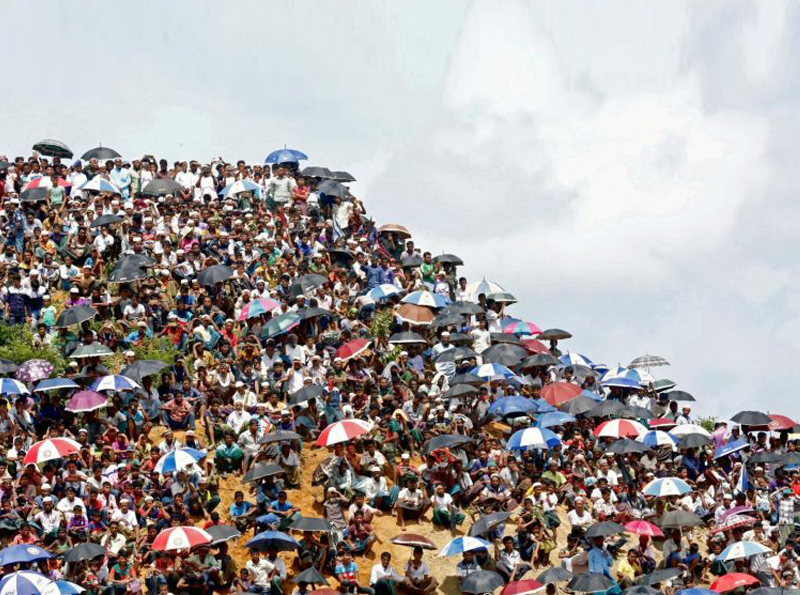 Two years ago, Bangladesh took in nearly 750,000 Muslim Rohingya refugees who had been driven out of Myanmar by a military crackdown. These attacks were referred to as ethnic cleansing by the United States, whereas United Nations investigators referred to them as crimes against humanity.

At that time, many questioned whether Bangladesh, a country with a population of more than 160 million and a developing economy, could take in such a large number of refugees. Considering that the refugees were fellow Muslims escaping severe human-rights violations, the foremost concerns may have been related to the humane aspect of the issue. However, the practicality of how Bangladesh would manage such a huge influx of refugees economically and socially was also of tremendous concern.

Perhaps the only person not profoundly apprehensive about the situation was Prime Minister Sheikh Hasina, who, when asked what her thoughts were regarding the Rohingya refugee crisis, replied surprisingly nonchalantly that Bangladesh manages to feed 160 million people and it can manage feed a million more.

Many believe that Sheikh Hasina’s decision was not entirely or even remotely altruistic, nor was it based on concern over the human-rights abuses inflicted on the Rohingya by Myanmar’s military. Rather, her decision seems to have been based on her desire for international recognition as a humanitarian, as a savior.

Two years on, we are seeing proof of this. Had the Bangladeshi government’s intentions in taking in the Rohingya been based on sincere humanitarian grounds, it would not be so tactlessly desperate to send them back to Myanmar, in all likelihood to face torture and death. The Bangladeshi authorities have already attempted two major repatriation efforts only to face refusal by the Rohingya to return to a country where they have suffered grave injustices and human-rights abuses for decades, a country that has never given them even the dignity of being considered citizens.

Recently, the Rohingya commemorated their second anniversary in Bangladesh, an event that was not welcomed by the government. According to the Rohingya, the gathering was mostly an event for them to discuss their uncertain future, but it did not sit well with the Bangladeshi authorities. Within days, mobile telecom operators were ordered to block all telephone and Internet coverage in the area of the refugee camps. But this achieved nothing for Bangladesh.

So why did Sheikh Hasina do an about-face on the Rohingya, whom she willingly took in two years ago? If, as mentioned before, it was merely a question of feeding almost a million more people, why the drastic measures of a communications blackout, similar to that imposed by the Indian government in Kashmir? Could it be that there is impending pressure from India to take in the Assamese people who it claims are Bangladeshis? Could this be the reason Bangladesh is trying to rid itself of the Rohingya at any cost?

Based on this change of policy, it is only fair to state that Sheikh Hasina had completely miscalculated what it means to welcome refugees and that it is not just about feeding some 750,000 extra mouths and claiming international glory and fame.

In the past two years, both Bangladesh and Myanmar have repeatedly conducted theatrics to give the impression that repatriation was imminent, but it has now become evident that there were no such plans in reality. In fact, how could Sheikh Hasina even expect that the country that has inflicted human-rights abuses on the Rohingya and burned their homes and villages will take them back? Last week, she had made a statement to the press that Myanmar was “dilly-dallying” over the repatriation. Aside from the absurdity of this claim, what is apparent is that Bangladesh is not faultless here.

A nation cannot decide willingly to accept refugees who have lost everything to an oppressive regime and then impose hardships on them when it feels that the refugees have overstayed their welcome. There was never any treaty signed between Bangladesh and Myanmar stipulating that the latter country would welcome the Rohingya back in two years. Nor has Bangladesh ever attempted to seek assistance from the United States or the European Union in finding viable solutions. Thus Bangladesh’s harsh treatment of an already marginalized people falls under the categories of the illogical and the abusive.

Where Bangladesh expects to go with its mistreatment of the Rohingya is unclear. In fact, there is simply no semblance of a plan, only hasty, ill-considered decisions. The time to make a decision on whether the refugees should be allowed to enter the country was two years ago. To welcome them, take credit for doing so and then abruptly mistreat them, thinking this will force them to move back to Myanmar, is simply naive on the part of Bangladesh.

To persecute an already persecuted people is unconscionable. The United Nations states that 600,000 Rohingya still in Myanmar face the threat of genocide. How then can Sheikh Hasina justify attempting to send them back? Ironically, she is currently on the cover of a Dutch magazine called Diplomat that calls her “The Mother of Humanity.” This timely ironical propaganda cannot camouflage the reality of the situation: Sheikh Hasina has placed Bangladesh on the wrong side of history with regards to the Rohingya.