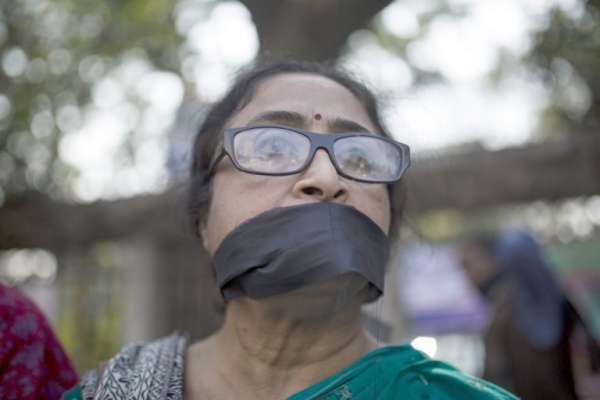 January 7th marks the anniversary of the beginning of the third consecutive term of the Awami League government in power in Bangladesh, making Sheikh Hasina its longest serving head of government since independence. On December 30th 2018, the Awami League secured an unprecedented victory in the parliamentary election, giving Hasina a fourth stint in power, including her time in government between 1996 to 2001. The election was marked by blatant rigging, with a manipulated result engineered by a combination of the efforts of law enforcement agencies, the civil service, the Election Commission, and the ruling party. The scale of the victory was shocking but, importantly, it was a spectacular display of the blurring of the boundary between the state and the party, and a serious blow to the semblance of democracy in the country. Even sympathetic analysts acknowledged the emergence of a one party system.

In 2014, the Awami League had returned to power for its third term through an election boycotted by all parties. Since then it had established its firm grip over the state machinery and polity. As a result, even before this election, there were significant concerns, at home and abroad, about whether the vote would be fair, despite the participation of all the political parties this time.

Well before the 2018 electoral process began, there were signs that the government would not risk a free election. As the Bangladesh Nationalist Party (BNP), the main opposition, was in disarray with its chief Khaleda Zia sentenced to 17 years in prison for alleged corruption, there was the emergence of a new alliance led by the octogenarian jurist Kamal Hossain, which was viewed as a formidable challenge to the incumbent. And while the balance sheet of performance of the incumbent Awami League over the last decade included in its credit column, economic growth and the curbing of the rise of transnational Islamist militancy, its debit column had arguably a longer list including growing authoritarianism, rampant corruption, economic disparity, and a deteriorating law and order situation.

Heading into the 2018 election, there were increasing incidents of violence, intimidation and persecution of opposition candidates and supporters, all of which were ignored by the Election Commission, indicating that it was far from a neutral arbitrator. Bureaucratic obstructions to the deployment of international observers were insurmountable, forcing the Asian Network for Free Elections (Anfrel) to abandon its plan of sending observers. The European Union (EU) also refrained from sending its team. The election, which was scheduled to be held during the day on December 30th, was practically held the night before due to the prior stuffing of ballot boxes, as documented by the media.

The predictable congratulatory messages came from India, China Russia and the monarchial countries of the Middle East. From Western governments, there were initial muted and muffled criticisms. The United States Department of State expressed concerns about “credible reports of harassment, intimidation and violence”; the United Kingdom urged for “a full, credible and transparent resolution of all complaints related to the conduct of the elections”; and, the EU noted the “significant obstacles to a level playing field […] throughout the [election] process [which] have tainted the electoral campaign and the vote.” US President Donald Trump’s letter 17 days after the election lacked a congratulatory note and highlighted the “international calls for independent investigations into the December 30, 2018 national election.”

But the overall message from Western governments indicated their willingness to “work with the new government” without mounting any pressure on Sheikh Hasina to reverse course. A year later, many commentators are still baffled and search for an explanation for the passivity on the part of these governments. The answer to this question may be found in an overarching foreign policy strategy. In hindsight, it is evident that these countries adopted a strategy referred to as “engagement”.

Notwithstanding that the term is often criticized as a “vexing, mutable, all-purpose word”, and there is a longstanding debate on its merits, the essential argument is that it is better to work with recalcitrant states to obtain leverage that might influence their behavior rather than to isolate them and adopt punitive policies. As International Relations experts put it, “engagement [is a] foreign policy strategy which depends to a significant degree on positive incentives to achieve its objectives.” It is argued that “the distinguishing feature of the American engagement strategies is their reliance on the extension or provision of incentives to shape the behavior of the countries with which the US has important disagreements.”

The increasing use of the engagement strategy in the post-Cold War era, can be attributed to the rise of various regional actors and the diminishing influence of the US on global politics. In the case of Bangladesh, this was largely influenced by the increasing geostrategic importance of the country along with the growing influence of China in the region.
China began pursuing a policy to expand its sphere of influence in South Asia and create a web of relationships in the region for a decade. Before the 2014 election, China called for an inclusive election but turned around soon afterwards to seize the opportunity of building a better relationship with Bangladesh in the backdrop of Western states’ criticisms of the election. Since then, the China-Bangladesh relationship has been elevated to a strategic partnership with significant Chinese investments in Bangladesh. The visit of Chinese President Xi Jinping in 2016 was a watershed moment in the relationship. There have therefore been concerns on the part of Western governments that any threat of punitive measures may push Bangladesh further into the Chinese sphere.

While these considerations and the strategy of engagement guide the Western approach to the new Bangladesh government, a few particular situations further constrained their capacity to maneuver. These include the ongoing anti-terrorism efforts of the Bangladeshi government.

Although the government publicly denied the existence of transnational terrorist groups in the country, both Al Qaeda and the Islamic State (ISIS) had made marks within the country. The Holey Artisan cafe attack on July 1st 2016 was a worrying development for the international community as it posed a threat to global security. The need for enhanced security cooperation with the Government of Bangladesh became significant and the success of the Hasina government in taming the militants therefore played in its favour.

The presence of the Rohingya refugees in Bangladesh was another factor that helped the Awami League government to sway international support. As Bangladesh was shouldering the refugee burden without any negative impacts on the interests of the Western countries, the governments favoured status quo. The Rohingya crisis became an important justification for Western governments to skirt their responsibilities in seeking to support democracy.

Business interests of various Western countries also triumphed over their concerns for democracy. The US, which has a very large trade deficit with Bangladesh, began pursuing an offer to sell weapons to Bangladesh, and trade between the two countries has increased in the past year. The EU, which is the largest market for Bangladeshi readymade garments (RMG) exports, did not want to destabilise the cheap source of product purchased by their consumers. In addition, Bangladesh’s economic growth in the past decades offers the country an opportunity of becoming a new destination of private investments as an emerging market. All of these required stability, or in other words, the status quo.

Domestic developments in various countries — Donald Trump in the White House, and the impeachment process in the US; the Brexit imbroglio in the UK; the rise of isolationist rightwing populists in Europe, and, France and Germany’s domestic political uncertainity — forced their governments to deal with internal issues rather than pursuing a proactive foreign policy for democracy. Indeed, President Trump’s penchant for authoritarian leaders sent a clear signal to all who digress from democracy what they can expect from the US.

However, concerns regarding democratic erosion, abysmal human rights records and shrinking space for the civil society and media in Bangladesh are not going unnoticed.

In February 2019, there was a call from a bipartisan group of Congress members to the State Department to act. A top Pentagon official told the Congress in a hearing that “Bangladesh’s December 30 elections point to concerning trend of consolidation of power by the ruling Awami League and raise gears that PM Hasina is aiming to achieve a de facto one-party state.”

Then, in October 2019, Alice G Wells, the acting assistant secretary at the Bureau of South and Central Asia, told Congress that “we remain concerned about political freedoms in Bangladesh and the direction of the country’s democratic trajectory. We continue to believe that it is critical for the Bangladesh government to allow civil society organisations to operate; for individuals and groups to be able to express their views freely, including online; and for the political opposition to play its lawful role in a democracy.”

In a similar vein, the UK Foreign Office noted in June 2019 that “the protection of human rights and democracy in Bangladesh diminished in 2018.” The EU expressed concerns on the situation of human rights in Bangladesh, particularly about reports of extrajudicial killings and enforced disappearances, and underscored the importance of free and fair election, during the ninth meeting of the joint commission of Bangladesh and the EU.

While these concerns are expressed, Western policymakers have often wondered about the absence of a robust and organised opposition which can voice the growing discontent among Bangladeshis.

The absence of voters in local elections and periodic outburst of social protests throughout the year have demonstrated that the citizens are deeply concerned about the way the country is being governed. Considering that, the Bangladesh government has remained vulnerable, due to its weak moral legitimacy tied to a series of flawed elections.

The strategy of Western governments to pursue their economic and security interests is helping to perpetuate a non-inclusive, corrupt, unaccountable system of governance in Bangladesh. It helps the building of a system which serves a small group while disenfranchising many, creating economic disparity. This strategy may bring economic and other benefits to the West but the policy has myopia written all over it. The Western policymakers seem to have created a false dichotomy of stability versus democracy, and preferred the former — but, as history tells us, in the long run this strategy archives neither. For Bangladesh, the status quo is not muddling through but a further erosion of democracy.