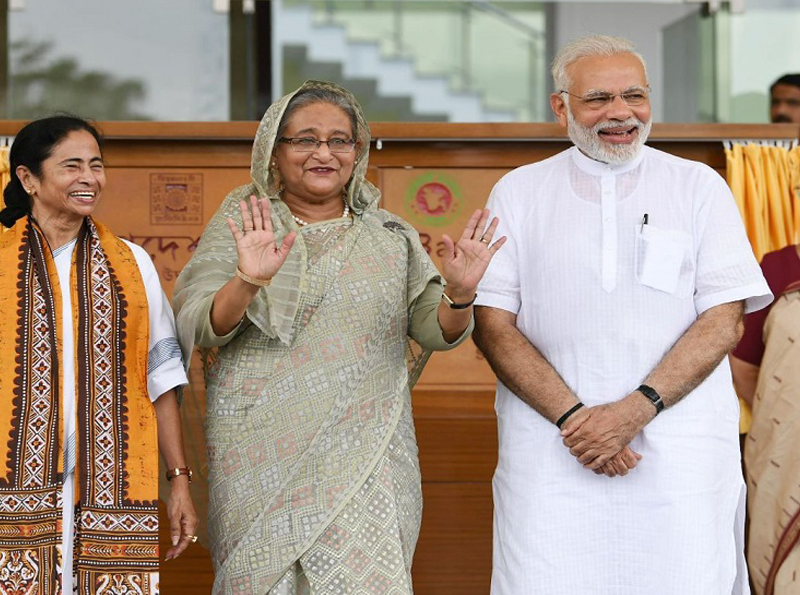 Contrary to the popular myth of Hindu exodus, Bangladesh is seeing a reverse migration from India, fueling speculation that pro-India Prime Minister Sheikh Hasina has imported Bengali-speaking Hindus and given them top government jobs to tighten her grip on the nation.

For more than 100 years, the ratio of Hindu population in the Indian subcontinent has been declining. The dip, from 75.1 percent in 1881 to 72.9 percent in 1901, in British India created a paranoid reaction that Muslims would outnumber Hindus. This myth has been repeated after every census ever since.

The share of Hindus in Free India continued to drop, from 84.1 percent in 1951 to 79.80 percent in 2011, and the paranoia is now being used by Islamophobes to rile up Hindus for political reasons.

Of India’s 1.3 billion people, Muslims constitute only 15 percent. Because of the staggering gap in these numbers, it is absurd to think that Indian Muslims would exceed Hindus. It is, however, true that India’s 200 million Muslims possess pendulum-swinging voting firepower, especially in minority-dominated areas.

Across India’s eastern border, the Hindu growth rate paints a surprisingly different picture. Bangladesh is facing a reverse migration. Hindus have been moving back to Bangladesh from India since Prime Minister Sheikh Hasina recaptured power in 2009.

Confirmation of this trend came from no less a person than Shahriar Kabir, a journalist and pro-India man who is widely known as an anti-Islamist activist in Dhaka. “Over the past ten years, 250,000 Hindus have returned to Bangladesh. There has been no new migration to India. As a result, the Hindu population has risen by 2.5 percent.”

“About the demographic changes in Bangladesh, as per statistics of the Bangladesh Bureau [of Statistics, which compiles demographic data] in 2011 there were 8.4 percent Hindus in the country, which has risen to 10.7 percent in 2017,” she told India’s parliament.

This sudden surge in the Bangladeshi Hindu population, which had been on a free fall since British India’s partition in 1947, has fueled wild speculation in Bangladesh: Pro-India Hasina has imported Bengali-speaking Hindus from India to fill key administrative positions in an attempt to tighten her grip on the nation.

Hindus had been historically denied top government jobs since the Pakistan days because they were suspected to be sympathetic to India. But now they seem ubiquitous. They all too often appear on television and in newspapers as government spokesmen. This phenomenon has caught public attention.

“The calculation of the percentage here is not clear to me. How did the Hindu population growth surpass the Muslims in the last few years? Can we assume that a great number of Hindus migrated to Bangladesh from India over the last few years?”asked Masud Kamal, senior news editor, Banglavision, a satellite TV channel in Dhaka, Bangladesh’s capital.

The questions surrounding the Hindu influx have merits. Research shows the trend defies logic. A study, “Hindu Population Growth in Bangladesh: A Demographic Puzzle,” concluded that “Hindus have lower fertility, higher mortality and higher international out-migration rates than Muslims.” Given the demographic characteristics, the natural Hindu growth rate trails that of the Muslim.

Because of this anomaly, the rumor mill is in overdrive as to why the Hindu population suddenly soared in Bangladesh and how Hindus so quickly captured so many top jobs. Skeptics dismiss the influx as a hoax, arguing the government fabricated the numbers to appease India. But they fail to explain the surge in Hindu high officials, giving credence to the Hindu import theory.

No official explanation has been offered. This silence may be too costly. In the event the hereditary frictions between the two communities again flare up, genuine Bangladeshi Hindus could be targeted by Muslim mobs on suspicion that they are “imported Hindus.”

The speculation surrounding the Hindu influx reflects a deep-rooted suspicion that marks Hindu-Muslim relations, a legacy of India’s age-old caste system. Most of the Bengali Muslims descended from oppressed-and-resentful-lower-caste Hindus who converted to Islam rebelling against their higher-caste Hindu oppressors. There is still bad blood between the upper and lower castes, or Hindus and Muslims.

Paranoia toward Bangladesh and its majority Muslim population runs high among some of the elites in India. Some Hindus, especially those in West Bengal who share a common language and a rich culture with Bangladeshis, accuse their neighbor of tacitly harboring anti-India terrorism. They also sound a false alarm, saying illegal migration into India is changing its religious demographics.

This rant reflects the century-old fear that Muslims would somehow outnumber Hindus and re-establish the Muslim empire in India. It is this fear that drove Hindutva guru V. D. Savarkar to oppose a Muslim country next to his Hindustan. Prime Minister Narendra Modi’s ultra-nationalist political outfit is using this anxiety against neighboring Bangladesh to galvanize public support.

Bangladesh, the land of 163 million Bengalis, including 12 percent Hindus, is India’s most friendly neighbor. Still, it has concerns about several bilateral matters, including a fiercely contentious assertion by Delhi that there are 40 million Bangladeshis illegally living in India and that they must be pushed back.

This issue spoiled the talks in Delhi in August between Bangladesh’s Home Minister Asaduzzaman Khan and his Indian counterpart Amit Shah, a hardline nationalist who is widely expected to be India’s next prime minister. The matter became so acrimonious that the two sides failed to issue a customary joint communique after the talks.

“India is keen to sign a pact with Bangladesh for deportation of illegal immigrants,” Press Trust of India news agency reported discussing the Shah-Khan talks. “Shah is known for his tough stand against unabated illegal immigration from Bangladesh to India.”

Delhi is going through a citizenship verification process to detect non-citizens, which is popularly known as the National Register of Citizens, or NRC in short, and has already classified nearly two million of its long-term residents as stateless.

India’s foreign minister Subrahmanyam Jaishankar has assured that the citizenship verification drill is India’s internal matter; it will not affect Bangladesh. Modi has reassured his Bangladeshi counterpart Hasina twice, first at the United Nations in September and then in Delhi in October.

Questions still remain: Why did Shah push Khan for a treaty to deport illegal migrants? Why did not Hasina-Modi joint statement include the assurance? There was no mention of the migration issue at all, a lapse that raises suspicions about India’s real intentions.

One possible clue is Modi’s Bharatiya Janata Party incited Hindus into religious-nationalistic fervor to win votes. Now the BJP is between a rock and a hard place. It understands the folly of “Operation Pushback,” but still must appease its militant saffron warriors, who want a Muslim-free India.

Or maybe Modi and Shah sincerely wish to resolve the “Muslim Question,” as their ideological guru Savarkar espoused nearly 100 years ago. During his election campaign, Modi told the migrants in states bordering Bangladesh to keep their “bags packed,” ready to be sent home. But his administration waited until his re-election in 2019 to bring up the deportation issue with Bangladesh, the most densely populated nation on Earth with an area of 56,000 square miles, just about the size of New York state and less than 5 percent the size of India.

India’s anti-Bangladesh paranoia appeared so incendiary that it once caught the attention of an American diplomat. During a discussion in Kolkata with visiting U.S. Embassy Dhaka’s political officer Denise Rollins, Dilip Mitra, additional director general of the state police for railways, listed a lengthy litany of complaints. He was convinced India’s archrival Pakistan had taken over Bangladesh; Pakistan’s military intelligence agency, backed by Islamic zealots, controlled Bangladesh’s army and its spy agency, all of which were working to make India “bleed from 1,000 cuts.”

On top of all this, he believed, illegal immigration from Bangladesh across a porous border was sharply increasing the Muslim proportion of West Bengal’s population. Ultimately, Hindus would become a minority in the state because Muslims, he said, “breed like pigs.” He vowed to flee the state before the demographic change occurred.

Mitra’s remarks reflected anti-Bangladesh and often anti-Muslim sentiments held by many other members of Kolkata’s elite with whom the diplomat had held talks. These included a former deputy director of India’s foreign intelligence body, the Research and Analysis Wing; two former generals who ran the Center for Eastern and Northeastern Regional Studies think tank; and Jayanta Kumar Ray, director of the Maulana Abul Kalam Azad Institute of Asian Studies, an affiliate of India’s Ministry of Culture.

“I was opposed to the link from Day One,” said Mitra, who was assistant director general of police for borders in West Bengal when the project started. It took two years for the government to meet the security requirements he demanded, including beefed up border patrols and several imposing fences, which greatly irritated the Bangladeshis.

Although the service restarted with great fanfare after a 43-year hiatus, ridership had been disappointing because immigration and customs procedures at the border crossing could take six hours, about four times longer than for buses. “It’s economically not viable,” Mitra said, with obvious delight. He said he would be happier if the train did not run at all.

Despite all the railing against Bangladesh, its people still keep close ties with West Bengal. Nahida Rahman Shumona, counselor at the Deputy High Commission for Bangladesh in Kolkata, estimated roughly 30 percent of West Bengalis have roots in Bangladesh and wish to see their neighbor prosper. Many Bangladeshis come to Kolkata for medical care and go shopping in the city’s vibrant markets and name-brand stores.

The mistrust of some Hindus toward Bangladesh is disturbing. It can only harm often-testy relations between the two countries. If the migration issue festers, business communities on both sides will go into hibernation. An economic nosedive will destabilize Bangladesh, and India will face an influx of refugees. Keeping lines of communication open is essential to successfully managing the bilateral relationship.

[B. Z. Khasru is author of “Bangladesh Liberation War, How India, U.S., China and the USSR Shaped the Outcome.” His new book, “One Eleven Minus Two, Prime Minister Sheikh Hasina’s War on Yunus an America,” will be published shortly.]