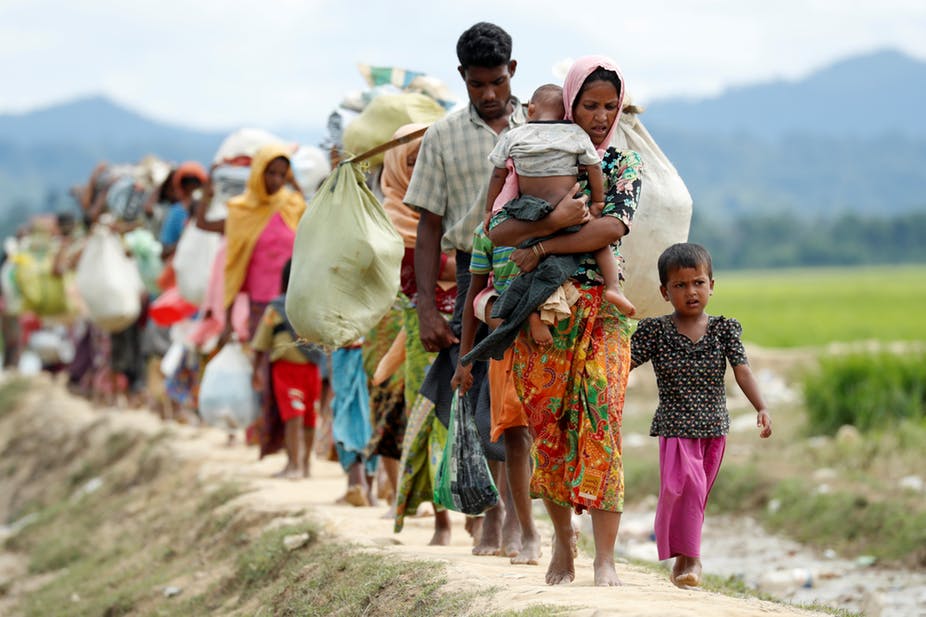 The International Court of Justice (ICJ) ruling on Myanmar about taking emergency measures for the protection of the Rohingyas, delivered at The Hague on Thursday, is historic on many counts and provides a glimmer of hope for the persecuted community of Myanmar. The question is: where do we go from here?

To be specific, the ICJ imposed four provisional measures on the Myanmar government; these require the government to prevent genocidal acts, ensure the military and police forces do not commit genocide, preserve evidence of genocidal acts, and report back on its compliance within four months, then every six months afterwards. The ICJ’s order, issued after The Gambia filed a case in November 2019, is significant, among other reasons, for its recognition of the community as Rohingya. This is for the first time that an international legal body has identified them as such, contrasting the claim of the Myanmar regime that they are Bengalis, or their identification as “displaced Myanmar citizens” by many other countries. It is a long-overdue recognition, coming through a process in which the Myanmar regime has fully participated. The court further stated, “the Rohingya in Myanmar appear to constitute a protected group within the meaning of the Genocide Convention.” The reference to them as Rohingya and asserting their status under the Genocide Convention have implications beyond the case in the ICJ, particularly on the ongoing case against Myanmar in the International Criminal Court (ICC).

t is also worth noting that this ruling was unanimous, issued by a panel of seventeen judges, meaning that even the ad hoc judge nominated by Myanmar for the hearing voted against the country. The historic nature of the interim order means that this is the second time that the ICJ has issued such an order against a country. Previously, two “provisional protective measures” were issued by the ICJ, in April and September 1993, to the then Federal Republic of Yugoslavia. The ICJ ordered Yugoslavia “to do everything in its power to prevent the crimes of genocide and to make sure that such crimes are not committed by military or paramilitary formations operating under its control or with its support.” Yugoslavia flouted those orders. Atrocities against the Bosnian Muslims continued, leading to the genocide in Srebrenica in July 1995. The significant difference between these two instances is that Yugoslavia questioned the legitimacy of the court, while Myanmar has fully participated in its proceedings. It sent its most famous representative to defend itself. Aung San Suu Kyi, once considered an icon of human rights and democracy, led the team which was tasked to convince the court and the international community that Myanmar’s actions were driven by its security concerns. This has not only failed but also, importantly, provided added legitimacy to the process.

The unanimity of the judges also destroyed Myanmar’s argument against the jurisdiction of The Gambia. This is the first time that a country without any direct connection to the alleged crimes brought a case before the ICJ, and now the court has concluded that, “The Gambia has prima facie standing to submit to it the dispute with Myanmar on the basis of alleged violations of obligations under the Genocide Convention.” As such, the court has set a precedent with implications for the future. In a similar vein, we must note that the court has declared that there was prima facie evidence of breaches of the 1948 Genocide Convention. Consequently, the case against Myanmar’s committing genocide has gained weight, although the provisional measures are not a verdict on whether a genocide was committed in Myanmar. That will be determined later through a lengthy process.

Notwithstanding these significant developments, the question that has been discussed extensively in the media since Thursday is: what impact will these interim provisions have? It is well-known that although the ICJ rulings are legally binding to countries, the ICJ has no mechanism to enforce them. Therefore, these instructions are not likely to have an immediate impact on the Rohingyas. But considering that Myanmar has fully participated in the process, it will have to respond to these instructions—especially because this is not the end of the process in the ICJ, but rather only the beginning. The case filed by Gambia is yet to be heard, the merit of the case is yet to be determined. In 2007, an ICJ verdict held Serbia responsible for failing to prevent the genocide from occurring and for violating its obligation to comply with the provisional measures ordered by the court. Myanmar is unlikely to disregard the orders of the court, although it has defiantly rejected the ruling.

In the past, Myanmar has, on various occasions, tried to fool the international community through measures which were intended to distract them rather than address the central issues relating to the crisis. Myanmar has been insisting that it is taking measures against “rogue elements” within the military for excessive use of force during what it terms as its “clearance operation” in the Rakhine state in 2016 and 2017. During the oral presentation at ICJ, the Myanmar delegate acknowledged that “there may have been excessive use of force and violations of human rights and international humanitarian law in Rakhine State.” These statements and postures mean that the Myanmar government will try to whitewash. In advance of Thursday’s ICJ ruling, the so-called Independent Commission of Enquiry (ICOE) published its report in which it stated, “The ICOE has not found any evidence suggesting that these killings or acts of displacement were committed pursuant to an intent or plan to destroy the Muslim or any other community in northern Rakhine State.” Aung San Suu Kyi, in an op-ed published in the Financial Times on January 23, referring to the report, acknowledged that war crimes have been committed but she asked for time: “Give Myanmar time to deliver justice on war crimes.” Clearly, this will be the strategy of Myanmar going forward.

The ICJ order about provisional measures is a moral victory for the Rohingyas and for all of humanity. Human rights workers around the world, who have been at the forefront of the fight for justice for the Rohingyas, have welcomed the ruling. The celebration of the Rohingya refugees in camps in Bangladesh following the announcement is understandable. In the face of inaction of the international community in this regard, the ICJ order is a positive development. But it must also be noted that the provisional measures are not targeted to alleviate the plight of the one million refugees stranded in Bangladesh. These instructions will not compel Myanmar to immediately take back the refugees.

The court has mentioned that Myanmar’s steps “to facilitate the return of Rohingya refugees present in Bangladesh… do not appear sufficient in themselves.” This bolsters the argument that an improvement of the existing situation in Myanmar is a prerequisite for the planned repatriation. The ICJ ruling shouldn’t be considered as the solution to the refugee crisis. The Rohingya refugees’ desire to return home with dignity has not yet been achieved.

The ruling’s reference to the insufficiency of Myanmar’s steps has once again proved the imprudence of the Bangladesh government’s bilateral arrangement with Myanmar, and calls into question the repeated efforts of Bangladesh to repatriate without a guarantee of the fundamental rights to Rohingyas and ensuring their safety. The Bangladesh government needs to understand that the ICJ ruling has created an opportunity to launch a robust diplomatic effort to pursue the issue in the international forum, and not be swayed by the countries that are failing to stand by Bangladesh in this time of crisis. Bangladesh must use its leverages with its close friends like India and China to change their policies. An absence of such efforts has been very costly to date.

It is incumbent on Bangladesh as well as on countries like India, Japan and members of the ASEAN to revisit their foreign policies. They must understand that their foreign policies have rather contributed, and continue to contribute, to a genocide in Myanmar. The international community should be vigilant against Myanmar’s strategy of distraction and whitewash on the one hand, and work towards a safe return of the refugees on the other. In a long battle against injustices, a moral victory is necessary but not sufficient. This is a small step in the right direction, and the journey ahead is long and arduous. The ICJ ruling shouldn’t make Bangladesh or the international community complacent. That will only help Myanmar and prolong the sufferings of the Rohingya refugees.