Iran’s Government Should Allow People to Mourn, Protest Without Threat of Violence by Center for human rights in Iran 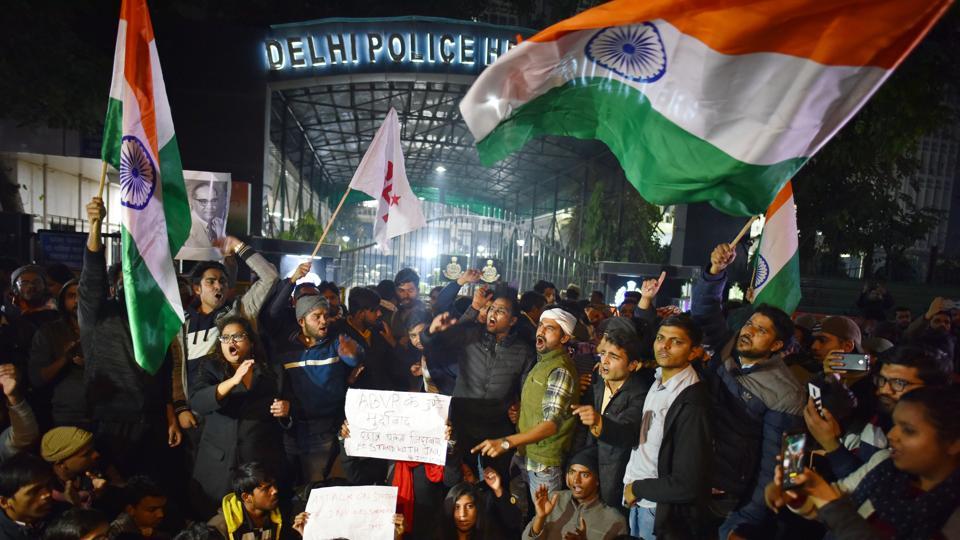 On Sunday evening, I was sitting with a journalist friend in New Delhi when frantic messages started pouring into our inbox. A mob of men with masks on their faces had stormed the campus and attacked the students at one of India’s most iconic universities, the Jawaharlal Nehru University (JNU), named after independent India’s first Prime Minister.

Videos trickled into our WhatsApp messages, showing students bleeding from the attack, among them Aishe Ghosh, the President of the Students’ Union. We drove toward JNU, only to be stopped midway by police officers, and the roads leading to the university were closed. We walked for 30 minutes in the pitch dark, since the street lights leading to the campus were mysteriously shut off.

Students returning from the campus toward the city were visibly shaken, warning us about “ABVP goons” surrounding the university and targeting students and other journalists present. The ABVP (Akhil Bharatiya Vidyarthi Parishad) is a student group affiliated with the ruling Bharatiya Janata Party, currently led by Indian Prime Minister Narendra Modi.

It was about 8.30pm when we approached the main gate of the campus, we saw hundreds of students, locals, and journalists, as well as men in their fifties with their faces covered. Right-wing activists wearing saffron scarves were visible under the lights of around a dozen television cameras. Glass shards surrounded the entry to the gate, while a mob heckled a television journalist.

Reporting in India for the last 14 years, I thought I had seen the worst. I had seen everything from riots to the government targeting minorities using state machinery to violence against marginalized people. But the first week of the new decade marked a remarkable low for law and order in India, a low for our justice system and our political leadership.

Close to 200 officials of Delhi Police were scattered outside the campus, while even more inside were guarding the campus behind the gates. With the help of contacts passed on by mutuals friends, I made calls to several students who were locked inside. They said masked men, with sticks, rods and glass bottles had entered the campus in the early evening and had barged into previously identified rooms and started attacking students, many amongst them female students who were screaming for help. Eighteen students and a professor who had suffered severe injuries had been moved to the AIIMS hospital.

But by the time we reached JNU, the main gate was locked and the darkness made it impossible to differentiate between the mobs and the students looking for help. When I tried to engage a police officer in a conversation, a mob of young men, allegedly from the ABVP, ran in the direction of a young student who was later identified as Sajjad. They ran behind him chanting Jai Sri Ram, held him by the collar and began to beat him. Police in riot control gear looked in the direction of the mob and stood still. I asked a senior official to control the mob that was going after an innocent student. He looked at me and said it was too dark for them to ascertain what was going on.

Next to the police, some men shouted proudly about uprooting “anti-nationals” and “urban Naxals” from the university. “Desh ke gaddaron ko goli maaro saalon ko,” (“The traitors of the nation, shoot the rascals”) they chanted while friends and their supporters recorded it on smartphones to circulate on WhatsApp.

The term Urban Naxals — referring to members of India’s Communist Party — was first coined by the far-right in India to de-legitimize Indian intellectuals, dissenters and activists. It was later used by Prime Minister Modi to attack his critics.

At one point, I identified an acquaintance, a professor from a neighboring college. I called her name, but she continued to run in the direction of another mob. When I caught up, she said: “I know who you are, [but] I need to protect my students.”

She was referring to two female students who were being heckled by another group of students and right-wing activists. The mob was saying the girls were member of the terrorist group, Lashkar-e-Taiba. When the girls fought back, one of them told her: “We believe in gender equality, we gave a demo to your colleagues inside, can repeat it right here.” The men were referring to the violent attack earlier on female students inside the campus.

Senior officials of the Delhi Police, who have been accused of complicity in the attacks inside the campus, watched this threatening exchange in silence “We don’t have orders to act, they are students, this is their internal problem,” one of them told me.

I started recording the heckling on my camera phone when one of the men from the mob asked for my identity card. A young student who had met me at a lecture in Mumbai kindly offered me her scarf to cover my face. “We need our journalists,” she said. “We need you safe so you can document our stories.”

I also recorded footage of two older men who had their faces covered and stood with sticks at the entrance of JNU, telling me that they wanted to cleanse the institute of Mughal progeny (i.e. Muslims.) I uploaded the video on Twitter and tagged Delhi Police like many other journalists.

Instead, the Delhi Crime branch has filed charges against victims of the attack, including the JNU Student Union President Aishe Ghosh, for vandalism.

In some ways, this violence comes as no surprise. The stage for such brutality at JNU has been set by Modi’s actions in the past seven months , where dissenting students and activists have been labeled anti-nationals and traitors. The Prime Minister infamously remarked in a speech that trouble makers and rioters in the country could be identified by their clothes.

As a journalist who stood there at JNU, watching the events unfolding on the evening of Jan. 5, it is clearer than ever that the Modi government needs to take accountability for emboldening the fascist mob that has now arrived at our doorstep, the mob that is seeking revenge for our demands for a just and secular democracy.

Ayyub is an Indian journalist and the author of Gujarat Files: Anatomy of a Cover Up