The road to impeachment is paved with potholes 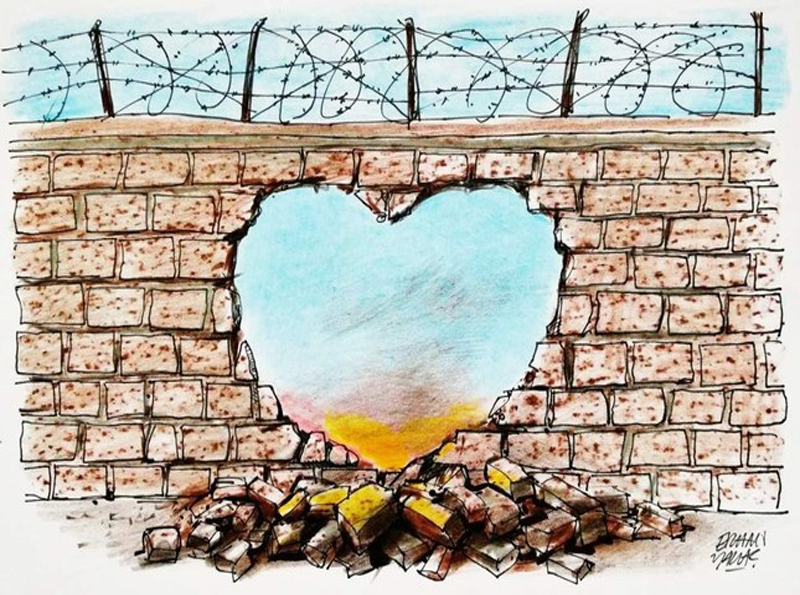 The long-awaited safe zone, stretching from the towns of Tal Abyad and Ras al-Ayn in northeastern Syria, has finally become a reality. It may soon become home to around 2 million Syrian refugees currently in Turkey. Yet, in order to house this number, at least 10 further towns must be built, at an estimated cost of $26 billion. The potential source of funding for this huge figure remains to be seen.

On Nov. 1, the Turkish and Russian militaries began joint patrol operations in Syria’s northeastern region, as part of a deal agreed on October 22 between President Recep Tayyip Erdoğan of Turkey and his counterpart Vladimir Putin of Russia.

The first Turkish-Russian patrols went ahead on schedule, lasting for several hours and covering an area six kilometers deep into Syria across a borderline stretching 110 km in length. In line with the terms of the October 22 memorandum, manoeuvres launched as part of Operation Peace Spring have now come to a halt, but the mission is still on-going. Turkey could resume action at any time if necessary, according to Defense Minister Hulusi Akar.

Turkey launched Operation Peace Spring on Oct. 9 with the aim of eliminating terror groups, Daesh, still present in the area, and the People’s Protection Units (YPG), which were in control of various northeastern territories at that moment.

The operation has proved a success in managing to strengthen Turkey’s national security, while also preserving Syria’s territorial integrity. The operation has ensured that YPG terrorist units have been removed at least 30 km away from its borders, creating a tangible opportunity to build a safe haven free of terror to which Syrian refugees can eventually return.

“We are not only working to protect the rights and interests of our country, but also to ensure that our Syrian brothers and sisters can return to their homes safely and voluntarily,” stressed Turkey’s Defense Minister.

Turkey hosts around 4 million refugees, mainly from Syria, more than any other country in the world, and has spent $40 billion, according to President Erdoğan, on providing for their needs in terms of adaptation and shelter.

The Turkish-Russian patrols have flushed the presence of terror groups from the area in a long-awaited sign of future stability for the region. A safe and secure environment is the ultimate requirement in guaranteeing the voluntary repatriation of Syrian refugees. Yet, in order to ensure this takes place to a significant degree, it must be accompanied by a vast reconstruction effort.

In an attempt to free Syrian cities, cities such as Raqqa (the would-be capital of the territory controlled by Daesh) in particular, have been virtually wiped out by the U.S.-led international coalition, with much infrastructure having been destroyed. More worrying, ordinary Syrian’s have had their lives ravaged by the ongoing conflict to such a degree that the average life expectancy in the country has plummeted from 73 to 63 years.

Not a single bridge across the Euphrates River has been left intact, and so this has been the first infrastructural issue tackled by Turko-Russian reconstruction efforts. Just days after the historic October 22 agreement was made, Russian construction corps units had erected the first suspended boat-bridge to restore transport links that residents of the area had been deprived of for years.

Turkey’s Operation Peace Spring is already bringing tangible results. According to the U.N., at least 94,000 Syrians have settled back home since Oct. 22. The recently liberated town of Tal Abyad has seen the most returns, although security remains an issue. With the YPG units gone, the city council has resumed it normal functions, governed by 23 members drawn from several of the area’s ethnic and religious groups. This development signals the democratic direction of the country’s future.

Still, without strong support from the international community, reconstruction efforts will come to nought. Although this reality has been echoed by various actors, major donors are quite reluctant to contribute due to commercial considerations and political intrigues.

The U.S. is openly reluctant to spend money and effort on Syria’s rehabilitation citing the necessity of political resolution coming first. Not the least, on the table are the impressive Syrian oil reserves largely found in its northeastern regions and it’s rather them that motivate the U.S. to deploy the army units in Deir ez-Zor under the pretext of their protection from the terrorists.

“This mentality considers a drop of oil more valuable than a drop of blood and sees nothing but its own interest in Syria and around the world. When we look around, we see only humans, souls and life,” President Erdoğan has recently said. For sure, this contradicts the approach to the refugee issue of Turkey, which has been hosting and supporting millions of the Syrian refugees for years.

The U.N. regards the Syrian refugee crisis as its major challenge but remains reluctant to call for immediate financial support to the reconstruction effort while continuously stressing the basic principles relating to the “voluntary, safe and dignified return of refugees.”

Russia appreciates Turkey’s refugee concerns. To resolve the matter, it considers the reconstruction effort in Syria of urgent necessity. “Many, including the Gulf countries, are ready to assist with reconstruction but are scared of potential U.S. sanctions”, has said Alexander Lavrentiev, Russia’s special representative at the Astana peace talks, on Aug. 29, ” the U.S. and EU believe that no money should be spent until a tangible political process is started meaning the regime change in Syria.”

will the help come?

Up till now, Turkey has been virtually alone in response to resolving the Syrian refugees’ crisis. “If necessary, Turkey on its own will establish a city for refugees in Syria. We did not provide all these services with any expectation”, has recently said President Erdogan while acknowledging this effort as Turkey’s “human and moral responsibilities.”

During the Syrian war time, the EU support rendered through nongovernmental organizations (NGOs) has hardly exceeded $3.3 billion.Moreover, Ankara and Brussels signed an agreement to ease the EU burden from the refugees’ influx in March 2016.

According to it, Turkey was to receive 6 billion euros ($6.6 billion) for financial support of the hosted Syrian refugees and to take responsibility, in its turn, over discouraging an irregular migration through the Aegean Sea.

While the refugees’ influx through Turkey has gone down dramatically since then, only 2.22 billion euros were disbursed as of June 2019, according to official data. Unfulfilled as well remain other articles of the March 2016 agreement, such as the visa-free entry to the EU for the Turkish citizens and an update of the Turkey-EU customs union.

The EU is still due to decide who are those migrants and refugees and to adopt a clear policy on them. Lack of this, impedes its resolving of the refugees’ crisis and makes the sporadic attempts far from humane. Last June, the Italian government has formally banned a rescue boat from entering its waters after plucking 40 migrants off the Libyan coast. In August 2018 alone, for over a week 150 people were stranded on board of an Italian coast guard boat while the Catholic Church, Albania and Ireland kept considering either to let them to disembark.

The problem gets aggravated today with thousands of the Daesh terrorists, including the citizens of the EU countries, captured in northeastern Syria. The countries of their origin are reluctant to take them from Syria back home to prosecute, as well as their wives and children, scared of a fresh influx to Europe of potential terrorists and radicalized elements. This dumps the burden of dealing with this highly sensitive matter on Turkey when cleansing the safe zone area in northeastern Syria.

Russia approaches the matter in a way that a “person committing a crime in a foreign country shall be subjected to legal proceedings in that very country. Thus, if someone is accused of fighting on the side of Daesh, then – naturally – he is to face the court of the Syrian Arab Republic,” Alexander Lavrentiev said.

The Erdoğan-Putin agreements of Oct. 22 have generated another and no less important result: after years, the Syrian regime troops may resume control over the northern border and are currently in the process of restoring “the regime authority over areas previously controlled by the YPG terrorists in northeastern Syria,” according to Bashar Assad.

In a televised interview on Oct. 31, Assad has recognized the Oct. 22 agreements as a positive step to contribute to Syria’s territorial integrity. Cleansing from the YPG presence a zone along the Turkey-Syria border eventually “paves the road to liberate this area in the near future,” claims Bashar Assad, though now “it might not achieve everything.”

Meeting the emerging situation demand, the Syrian regime seems to be taking these days a more constructive approach to the issues of political resolution. As a surprise development, it’s changed the previously uncompromised position on the future Syrian constitution. The latter is considered these days in Geneva by the first ever meeting of the Syrian constitutional committee. “The 2012 version is an up-to-date constitution,” has said Ahmed Kuzbari who heads the Syrian regime delegation at the meeting in Geneva, “but we don’t see a problem if we, the Syrians, meet to consider its possible modifications or carving out anew the constitution that might change our realities.”