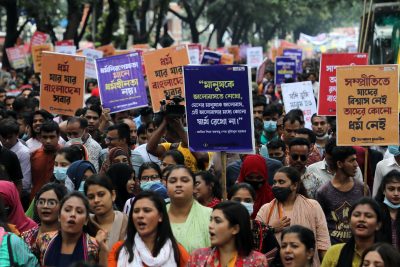 Bangladesh remained firmly under the grip of the incumbent Bangladesh Awami League in 2021. The ruling party faced no formidable opposition, the country celebrated its 50th year of independence and the COVID-19 pandemic was less devastating than was predicted.

Bangladesh Awami League (political party in Bangladesh) held a Rally for Peace and Harmony from Bangabandhu Avenue to the Central Shaheed Minar to protest attacks on temples and puja venues at different parts in the country, Dhaka, Bangladesh, 19 October, 2021 (Photo: Sipa USA via Reuters).
Bangladesh’s exclusion from US President Joe Biden’s Democracy Summit in December 2021 was the first indication that the United States is noticing the ongoing democratic backsliding in the country. The US Treasury then imposed sanctions against the Bangladeshi paramilitary force Rapid Action Battalion and seven of its current and former officers. This was followed by the US State Department’s travel ban on two former Bangladeshi officials — including the head of police — for human rights violations, including allegations of extrajudicial killings.

While the Bangladesh government denied these allegations and criticised the ‘unilateral’ decision, discussions at home and abroad highlighted the country’s extensive human rights violations.

The strain in the India–Bangladesh relationship began to show in 2020, as China’s bonhomie with Bangladesh made India increasingly uncomfortable. The situation took a turn for the worse when India failed to deliver COVID-19 vaccines despite a commercial deal signed in 2020. As Bangladesh was relying exclusively on vaccines produced in India, the decision to halt the supply created a serious public backlash. This provided China with the opportunity to accelerate its ‘vaccine diplomacy’ even though Bangladesh had previously rejected China’s request to conduct a vaccine trial.

China’s expanding influence is also clear in its investments in infrastructure development in Bangladesh. China has not been shy to demonstrate its growing power. In April 2021, the Chinese Defence Minister stated that Bangladesh should not join any military alliance outside the region and warned the country against joining the Quad or risk ‘substantial damage’ to the relationship. Bangladesh officially rebuffed this, but has not reduced its military cooperation with China. China has been the principal supplier of light weapons to Bangladesh since the 1970s and about 75 per cent of Bangladesh’s weapons supplies between 2010 and 2019 came from China.

The Rohingya refugee crisis continues as more than one million people have been sheltering in Bangladesh since 2017. The government began to relocate some of the refugees to a remote island after signing a deal with the United Nations that will provide help and protection to the refugees. Crime rates and violence increased in the refugee camps and a well-known Rohingya leader was killed in October. A UN Rapporteur has said that the Rohingya militant group, the Arakan Rohingya Salvation Army, is behind the killing and terrorising of the refugees.

Throughout 2021, there were sporadic outbursts of anti-government demonstrations, largely in reaction to particular issues rather than challenging the ruling party’s legitimacy to govern. In February 2021, protests erupted after author and social activist Mushtaq Ahmed died in jail after being charged under the draconian Digital Security Act. He was in detention for nine months and was allegedly tortured.

The Act is being widely used to muzzle any dissent. Between 19–29 March 2021, anti-Modi demonstrations rocked the country and the government’s heavy-handed measures cost at least 10 lives, followed by the arrests of leaders of the conservative Islamist group Hefazate Islam. In late November, students demonstrated demanding road safety after deaths from road accidents highlighted the nexus between transport owners and the government, and the government’s unwillingness to enforce stricter laws. The movement was reminiscent of a 2018 movement with similar demands, which forced the government to draft a new law that has still not been implemented.

During Durga Puja, Bangladesh’s largest Hindu festival, the country witnessed the worst attacks in many years against its Hindu minority community. Attacks on property and temples were reported in at least 19 districts. It is alleged that law enforcement agencies turned a blind eye and local administration was complicit in the attacks.

On the political front, the opposition remained tame, due to the government’s wanton persecution and the lack of unity. The Bangladesh Nationalist Party (BNP) faced a crisis not only over its leadership but also about its future direction. BNP leader Khaleda Zia — who is serving a 17-year sentence on graft charges — was hospitalised in November 2021. Her sentence was suspended in March 2020 and she is allowed to be at home, but only on the condition that she cannot participate in politics and cannot travel. As such, her family and Party’s request to send her abroad for treatment was denied by the government.

Despite the pandemic, the Bangladesh economy continued to grow, thanks to the growth in the ready-made garment export sector and increased remittances. GDP is expected to rise to 6.6 per cent in the 2021–2022 fiscal year and 7.1 per cent the year after. Official statistics claim that per capita income has grown significantly to US$2554.

The UN General Assembly’s approval of the proposal for Bangladesh to graduate from least developed country status to the developing country category was a welcome development. But economists have expressed concerns about whether the country is heading for a middle-income trap. The benefits of good economic growth have become limited to a small group of people, which is a matter of alarm. During the second wave of COVID-19 in August, 32 million people were pushed into poverty. The middle class has been hit hard by rising costs of living, particularly the government’s decision to raise fuel prices.

Bangladesh has been modestly successful in managing COVID-19, despite low vaccination numbers. But US sanctions are a clear indication that the world is watching the ongoing erosion of its democracy and continued slant toward China. How the ruling party addresses these issues remains unclear.

Ali Riaz is Distinguished Professor of Political Science at Illinois State University, non-resident senior fellow at the Atlantic Council and President of the American Institute of Bangladesh Studies.

This article is part of an EAF special feature series on 2021 in review and the year ahead.