Where the Uighurs are free to be

The pressing question is how to avoid tyranny 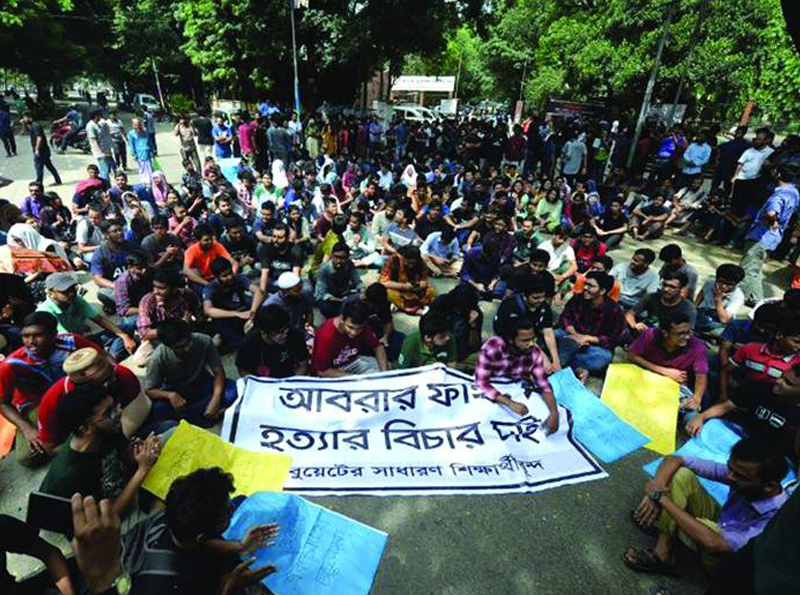 The problem in Bangladesh is primarily that no basis was ever established for an effective two-party system, writes William Milam
By William Milam October 18, 2019

“As for the future, your task is not to foresee it, but to enable it.” So said the celebrated French pioneer aviator, poet, novelist and journalist Antoine de Saint-Exupery. He said (or wrote) this in 1942 when, after escaping Nazi-occupied France, he was in the United States to drum up support for a broad allied effort to defeat the Nazis and free his native country. I like to think it was a call to arms for the youth of the world, and especially for politically active students to take a large role in defeating those forces that promised a pernicious authoritarian future. A visionary himself, I think Saint-Exupery reckoned that students must be the vanguard of political resistance to such forces. And his admonition to the young may be resonating these days in Bangladesh Unless you are following Bangladesh

Closely you may not know that in the past week, many thousands of university students have been out on the streets of Dhaka and many others of the country’s cities protesting the brutal murder of one of their kind. An ordinary, seemingly apolitical young male student was beaten to death by a group of students belonging to the government-supported student organization at the Bangladesh University of Engineering and Technology (BUET) because he criticized the government and implicitly the prime minister on social media. There have been two other protests by university students in Dhaka in the past year, one over quotas on jobs for graduating students and one protesting the dysfunctional traffic control in that congested city which had killed several students. But these protests were limited to Dhaka and fizzled out in a few days. The protests going on now are nationwide, and thus have more potential to grow into a wide political movement against the government. They reflect the great tensions in the country, the serious unrest just below the surface of a nation that resembles Orwell’s dystopian world of his great novel, 1984. The totalitarian police state that is now Bangladesh has stoked up resentment and frustration. In a sense, Bangladesh is in full lockdown, and fear is pervasive and stultifying. But whether the current protests will be sustained or be quashed by the very powerful and lethal Orwellian instruments of the state is very uncertain.

The government’s reaction has been comic and unpersuasive. Instead of distancing itself from the murder, claiming it was the act of a rogue group of students, the government’s reaction implies, strangely enough, that it has a conscience – that it was somehow responsible for this tragedy; and in fact, that is probably indirectly true. This student group has been for a couple of decades now, just another paramilitary arm of the Awami League and of course, of the Awami League one-party government since 2014. So while it may have acted without any specific direction from above, it is clearly in the business of doing the government’s dirty work. There is ample evidence that it has done just that in other instances of student unrest and protest such as the previous protests described above. The tradition of student leadership of resistance movements has been, unfortunately, totally corrupted in the past three decades as their political organizations have become simply paid for street fighters for their respective parties. This has meant that serious student resistance movements now must come from the students without political affiliation and, thus, without the organizational capacity that earlier student movements had.

In Bangladesh, the tradition of student activism is very strong, and historically students have been the vanguard of resistance to overweening state oppression, which unfortunately, was not uncommon. This goes back to the very foundation of the state of Pakistan after the partition of India in 1947. It was students that led and were martyred in the early 1950s “language movement.” So, in fact, from its inception, students led the resistance in United Pakistan to policies they found oppressive or discriminatory. Students remained in the vanguard in the 1960s resisting what they saw as policies that discriminated economically and politically against East Pakistan. And in the 1971 war of separation, students were an important part of the insurgent forces.

In my time there, it was the students who forced the leaders of the two major parties to agree on a common plan of action against military dictator President Ershad. I can’t help recalling the euphoria that gripped us all in Bangladesh as the two-party political movement that the students had forged through their insistent efforts brought down the dictator who, until then, had resisted all attempts to dislodge him. He had done so for eight years primarily by playing off the two leaders against each other—a successful divide and rule strategy. Only a coalition movement could succeed in pushing him out. Among those euphoric moments, I recall like it was yesterday the day Ershad fell and in the celebrating crowds that jammed the downtown square tens of thousands of people were standing and cheering at the news, and I noticed that almost all of them were young. The memory still stirs me and brings back the euphoric feeling that gripped all of us that day.

Part of our euphoria was the feeling that Bangladesh was on the right side of history, a part of a period of history when democracy was on the march and seemed to be winning everywhere—“The End of History” as Frances Fukuyama put it. A year earlier, in 1989, the Soviet Union had lost control of its many satellites and Middle and Eastern Europe were suddenly teeming with new democracies. Why not Bangladesh we thought. A year later the Soviet Union itself broke apart. For a while at least we thought that the end of history—permanent democracy – had come, and that Bangladesh had been in the vanguard.

But it was not to be, neither in Bangladesh, nor in most of Middle or Eastern Europe or Central Asia. In Bangladesh, democracy needed a more solid base than euphoria and hope. For one thing, it needed history—a history of political parties used to the give and take of democracy, not trapped in a zero-sum game mentality, and devoted to the preservation of that democracy; after all it is clear that political parties are the guard rails of democracy. It needed strong institutions, such as a judiciary, that had grown up over the years and learned they needed to stand up to assaults on them by political parties. It needed a culture of tolerance and openness that promotes and at the same time constrains the give and take of political parties competing for power. All of the attitudes and institutional strength needed was missing in Bangladesh, and the result is the present authoritarian state. Some of those attributes were very atrophied in the European countries, but the main reason they have slipped away from the democratic path is that populism has played on resentments of people who feel left behind by the momentous change that 1989 brought.

The problem in Bangladesh is, however, much deeper and more fundamental; it is primarily that no basis was ever established for an effective two-party system. What is needed is primarily an effective and coherent opposition to one-party rule. I had hopes such an opposition was developing a year ago, but my hopes were dashed not only by the openly stolen election of December (which I could not imagine was possible), but the ineffectiveness and incoherence of an opposition that few Bangladeshis would risk their lives to vote for. I think the only hope now to reverse engineer Bangladesh’s politics will be a great independent student movement, not connected to any of the existing parties but to a cause of  freeing the state from its Orwellian present, that has hooked up with a coherent civil society political opposition. In other words, a repeat of 1990. But few of these students out on the streets now had even been born in 1990; they have almost zero knowledge of how student politics and regular politics can form dynamic consequential movements. Maybe the present troubles will be the beginning of that kind of consciousness on the part of students and on the part of the now fragmented and tormented civil society political opposition. This is where the opposition political parties should look to enable their future, but there is little sign of that at present.

The writer is an American diplomat and is Senior Policy Scholar at the Woodrow Wilson International Center for Scholars in Washington, D.C.

The article appeared in the Friday Times on 18 October 2019